When it comes to COVID vaccine boosters, until recently, it was all about Pfizer. Now the FDA has approved both Moderna and Johnson & Johnson boosters for those adults initially vaccinated with the corresponding vaccine. CDC approval followed quickly on October 21, 2021. This decision involved giving boosters to high risk individuals who had received either Pfizer or Moderna vaccines and all individuals who got the Johnson & Johnson booster. A November 19, 2021 decision by both the FDA and CDC further endorsed booster for all remaining adults who had received either Pfizer or Moderna vaccines. On November 29, 2021,  due to the emergence of the Omicron variant in South Africa and the evidence that it is spreading to other countries, the CDC strongly encouraged all adults to get a COVID booster.

In addition, new evidence has resulted in the FDA and CDC approving the use of any of the three COVID vaccines as a booster no matter which of them was used for the initial series. This is referred to as mix and match boosters.

This is based on a recent study from the National Institutes of Health looking at the effectiveness of booster shots that was presented at an FDA Vaccines and Related Biological Products Advisory Committee meeting on October 14-15, 2021. The study included 450 fully vaccinated individuals, divided into three groups of about 150 each. The groups differed only in what vaccine they originally got, Pfizer, Moderna, or Johnson & Johnson. Each group was further divided into three groups of 50, where each group got one of the three COVID vaccines as a booster. The overall result was that, no matter what vaccine you originally received, a booster shot increased your antibody response significantly without any unexpected side-effects. Three results were worth noting:

Based on the results of the study, it appears that the mRNA vaccines are interchangeable and those initially immunized with the Johnson & Johnson vaccine will have a better response with one of the mRNA vaccines.

This study supports the mixing and matching of primary series shots and booster shots from the different vaccine makers that has been done by several countries — including the United Kingdom, Germany, and Canada — for months. The success of this program is evidence that the approach works.

Preliminary evidence supports the use of a different vaccine type for COVID boosters. The most obvious benefit may be the higher antibody increase achieved with mRNA vaccines as boosters for those who initially received Johnson & Johnson, although there is no evidence that higher antibody levels are more protective against COVID-19.

As of this moment, the FDA is not recommending any specific booster, but is allowing the individual and their provider to determine which type of vaccine to use as a booster. The CDC followed suit and gave final approval to mix and match boosters which then became available the following day.

Although it is likely that mix and match boosters are safe and effective, there are three reasons to be cautious.

There appears to be no advantage to using the other mRNA vaccine for a booster in those who received an mRNA vaccine initially. However, due to an increased risk of blood clots linked to the Johnson & Johnson vaccine, the CDC has recommended the preferred use of Moderna or Pfizer vaccines, including as a booster for those who had the Johnson & Johnson vaccine initially.

The NeedyMeds website has a database of over 100 nationwide resources for those who have been impacted by COVID-19. For those looking for information on receiving a coronavirus vaccine, all adults and children over 12 years old can receive the vaccine free of charge. There may be options for children ages 12-18 to get vaccinated even if their parents don’t grant permission. Search online for your state’s requirements, area’s locations, and appointment availability.

The Unvaccinated Bear the Brunt of the Consequences of COVID and Much of the Responsibility for the Current COVID Situation in U.S.

Next Up for Anti-vaxxers – Iodine 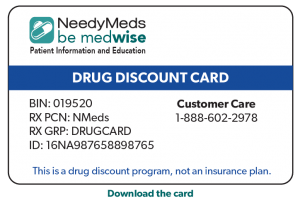